A pollen diagram of the “Moorer Busch” near Grevesmühlen (NW Mecklenburg, NE Germany) from the legacy of Franz Fukarek

In the search for pollen diagrams from NE Germany for the study of patterns in vegetation and sedimentation during the Weichselian Lateglacial it was discovered that many unpublished palynological data from the period of the German Democratic Republic are preserved in archives of research institutes. In order to save these data from oblivion and to make them available to the scientific audience, part of the material was digitalised and published (see revision of old palynological data from E Germany). One of the pollen records from the legacy of Franz Fukarek is from the Moorer Busch in western Mecklenburg-Vorpommern. 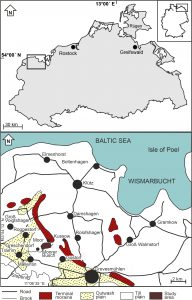 Location of the Moorer Busch in NW Mecklenburg-Vorpommern

The Moorer Busch (ca. 53°53´ N, 11°05´ E) lies immediately in front of the Pommeranian terminal moraines. The lower deposits in the basin consist of aquatic sediments that show the former presence of a lake. A percolation mire developed after terrestrialisation, locally including bogs. Due to extensive peat cutting after ca. A.D. 1800, the original peat sequence is (almost) completely destroyed. Currently, the peatland is predominantly forested with Alnus-Fraxinus carrs, and Betula carrs with Salix shrubs along the peatland margins. The peatland – that ishad no in- or outlet in previous times – is currently drained by the brook Rotebäk that discharges in the brook Stepenitz. 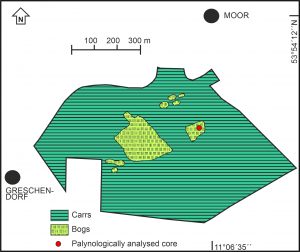 Map of the Moorer Busch in NW Mecklenburg-Vorpommern

During the Lateglacial Betula/Pinus forest phase (“Allerød”), birch forests dominated the dry lands in which pine played a minor role. During Open vegetation phase III (“Younger Dryas”) open vegetation types prevailed, though observations of stomata attributable to Pinus confirm that pine trees were present around the study area. During the Early Holocene again forests of birch and pine dominated the dry grounds, in which later Corylus expanded and became prominent. The middle Holocene section of the pollen diagram shows hardly fluctuating values of pollen attributable to Corylus, Ulmus, Quercus, Alnus, Tilia, Fraxinus and Hedera, indicating that rather stable deciduous forests prevailed. During the beginning of this vegetation phase, the basin terrestrialised and Sphagnum peat was formed at the cored location that towards the end of this phase graded into a Sphagnum-Ericales peat. The pollen section ends shortly above the mid-Holocene elm decline: younger peat deposits have been destroyed by peat extraction after A.D. 1800.

The pollen diagram will be added soon