A comparison of available pollen diagrams from NE Germany covering (part of) the Weichselian Lateglacial shows that some conspicuous differences exist in pollen values and in sediment/sedentates for the various vegetation phases between the regions of N Vorpommern and S Mecklenburg / N Brandenburg / Berlin.

First of all, the pollen diagrams from the southern part of NE Germany show hardly any sign of Open vegetation phase II (“Older Dryas”), which separates the Hippophaë phase (“Bølling”) from the Lateglacial Betula/Pinus forest phase (“Allerød”) (for the “vegetation phases of Vorpommern” see the research of the Endinger Bruch area). This might be due to the fact that the warmth-demanding Hippophaë did not disappear from the vegetation in the southern regions as consequence of slightly higher summer temperatures, or to the fact that in general vegetation remained denser in Open vegetation phase II (thus preventing an increase of soil erosion and consequent enlarged sediment accumulation due to which this very short phase is often missed during sampling). 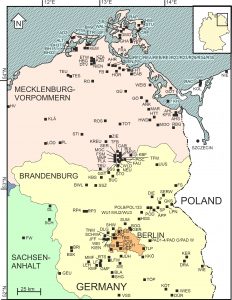 Secondly, pollen attributable to pine reaches much higher values in the Lateglacial Betula/Pinus forest phase (“Allerød”) in the southern regions than in northern Vorpommern, and at lower palynostratigraphic levels, thus dividing the Lateglacial Betula/Pinus forest phase into two subphases, whereas in northern Vorpommern four subphases are distinguishable. This might be due to a climate-induced delayed immigration of pine in the northern regions, but might also be the consequence of edaphic differences between the predominantly till-plain landscape in the northern region and the predominantly sandy outwash-plains in the south (cf. Theuerkauf 2003).

De Klerk, P. (2008): Patterns in vegetation and sedimentation during the Weichselian Late-glacial in north-eastern Germany. Journal of Biogeograpy 35: 1308-1322.