Percolation mires occur in environments with large water supply evenly distributed over the year, which results in an almost constant mire water level. This mire type is abundant in northern-central European river valleys that are fed by groundwater from the surrounding dry grounds. Due to good possibilities for drainage and due to initial fertility, almost all central European percolation mires have been drained: near-natural examples of this peatland type are extremely rare. A fortunate exception is the Biebrza valley (NE Poland). Extensive palaeocological studies into development and functioning of the Biebrza peatland have been carried out  along a 1.8 km long transect near Lipsk (Wassen & Joosten 1996), of which the results are currently interpreted and integrated.

Location of the study area near Lipsk

Detailed vegetation relevees are available of selected plots along the transect that characterise vegetation patterns along the fen gradient. In order to investigate the relation between actual vegetation and pollen deposition, and to palynologically characterise the different fen types, pollen surface samples were studied from these relevees. It is shown that a direct relationship between occurring plant species and pollen deposition does not exist: often plants occur only vegetatively without providing a pollen signal, whereas different individuals of a species have conspicuous different pollen production and dispersal (see also our research on Arctic surface samples). Only few of the wetland herbs have an extralocal pollen deposition trajectory: most pollen types show only local values.

Three cores were studied along the transect that cover the complete peat sequence: BZA, BZB, BZC. Core BZD originates from a deposit of lake marl below the peat. Core BZA was also studied on macrofossils. AMS radiocarbon dates are available for cores BZA and BZC. These cores cover the complete Holocene and partly even reach back into the Weichselian Lateglacial. They show a very stable peatland vegetation in the course of time, whereas the radiocarbon dates point to hardly fluctuating peat accumulation rates. Macrofossil and pollen analysis of the upper peat (core BZK) show, however, great changes in both dryland and wetland vegetation during the most recent time periods which relates to human influence. Next to the cores, also single samples from the peat-basis were studied in order to date the beginning of peat formation. 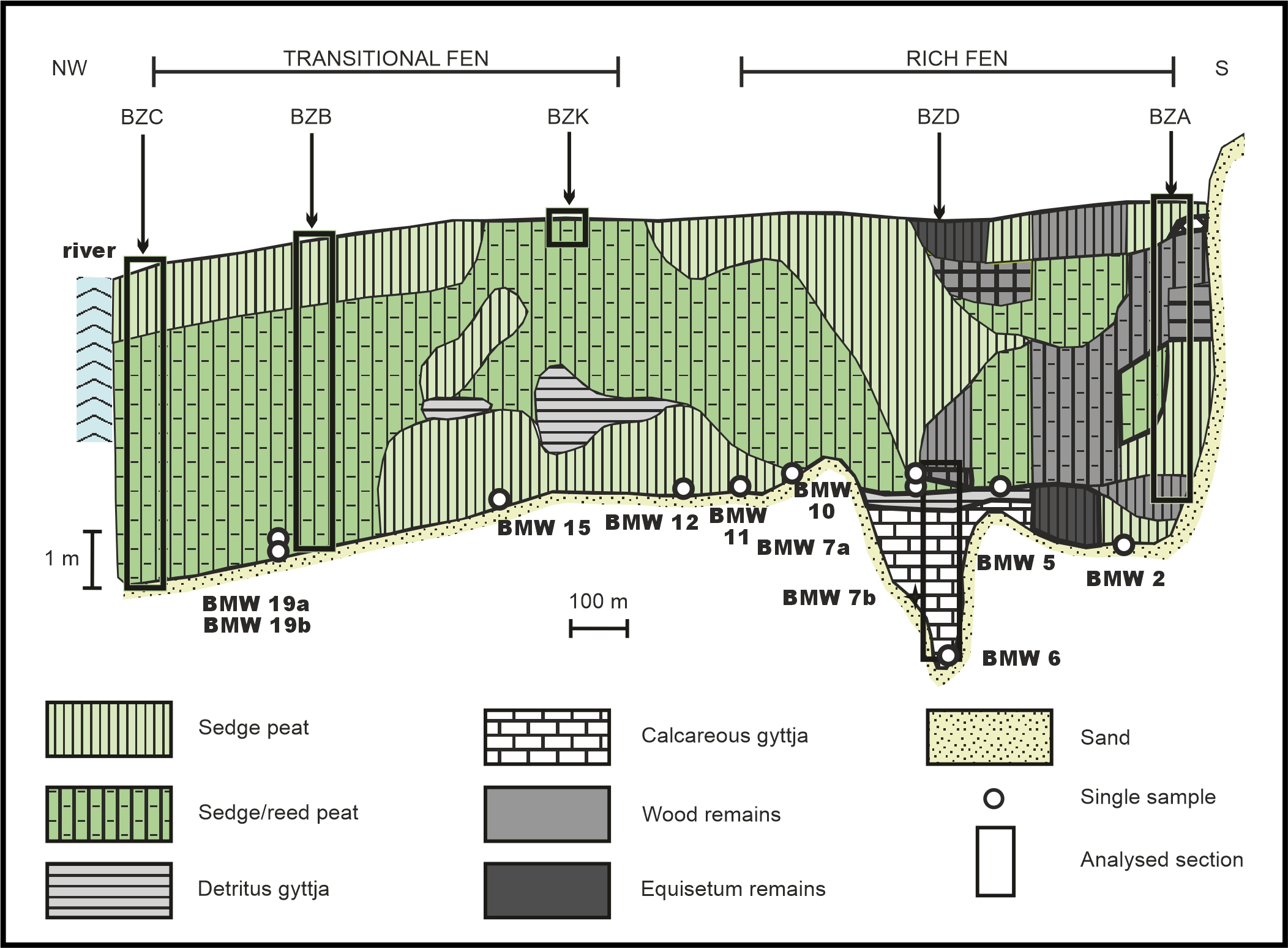 Lithological cross-section along the transect in the upper Biebrza valley; indicated are the locations of the palynologically analysed cores and of single samples at the sand/peat transition

A short-lived fluctuation in the Early Holocene

Core BZC shows a conspicuous pollen fluctuation around 9650 14C-years BP. It is superimposed on a broader fluctuation that indicates a more open vegetation phase that is generally found in Europe in the Preboreal. High resolution pollen analysis (sample interval 1 mm) indicate a duration of only a few years in which pine forests became more open. The resulting niches were partly occupied by tree birches and partly by birch shrubs, Artemisia, and Chenopodiaceae. Shortly before the increased opening of the dryland vegetation, a reed vegetation developed in the valley, in which Sparganium and later Typha became prominent. At the end of the short fluctuation, this reed vegetation diminished. The wetland vegetation development might be partly related to hydrological changes caused by a reduced evapotranspiration of the opened upland forest. These data show that the open vegetation phase of the Preboreal was not of uniform character, but that within its short time span of ca. 150 years an even shorter fluctuation of a few years to a few decades occurred. It is unknown whether this is a regionally restricted phenomenon or whether it has an overregional significance.

This research is carried out in close cooperation with Hans Joosten and John Couwenberg.