Currently, a widespread scientific confusion exists on the stratigraphic and geochronologic division of the Weichselian Lateglacial (cf. e.g. Usinger 1985, 1998; Hoek 1997; Björck et al. 1998; Litt & Stebich 1999; Litt et al. 2001, 2003; Eriksen 2002; De Klerk 2002, 2004; Terberger et al. 2004). In order to gain insights in the origins, development and extent of this confusion, the development of stratigraphical and geochronological schemes and concepts of the Lateglacial was studied in a historical and methodological context (De Klerk 2004). 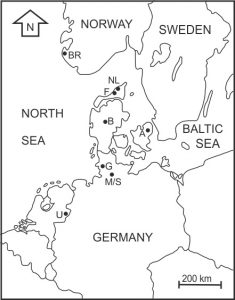 Locations of the most important studied sites that contributed to the development of stratigraphic and geochronologic divisions of the Weichselian Lateglacial: A: Allerød; B: Bøllingsø; BR: Brøndmyra; F: Fjerritslev; G: Glüsing; M/S: Meiendorf and Stellmoor; NL: Nørre Lyngby; U: Usselo

The recognition that cold climates must have prevailed in northern Europe in former times started with the finds of macrofossils of Dryas octopetala in Scandinavia (cf. Iversen 1973; Joosten 1995). After a discovery at Allerød (Denmark) by Hartz & Milthers (1901) that different strata contained macrofossils indicative for various vegetation forms, i.e. open vegetation and closed forests, several climatic phases were deduced for the Lateglacial. The open vegetation, also referred to as Dryas flora, was interpreted as typical for a cool climate, the forested ‘Allerød’ was assumed to have been fairly warm. After the development of pollen analysis as scientific discipline, various palynostratigraphic schemes were developed which aimed to describe different vegetation phases. Among these, the division of Jessen (1935) had the greatest influence on the further development of stratigraphic schemes.

The investigations of Bøllingsø (Denmark) by Iversen (1942, 1954, 1973) and his colleagues are of special importance. Iversen interpreted to have found evidence of expansion of birch forests in central Denmark prior to the Allerød. He called this assumed warm period ‘Bølling’. A critical review of his methods, however, proved that these are not completely suitable (cf. De Klerk 2004): it is demonstrated that Iversen’s calculation basis for pollen diagrams – the so-called ‘Iversen pollen sum’ – is unsuitable for pollen diagrams covering the Lateglacial because it includes pollen types that are possibly produced by wetland herbs (e.g. Poaceae, Cyperaceae). These types might erroneously suggest an open upland vegetation when actually a wetland vegetation along the lake borders had expanded. A recalculation of the Bøllingsø-diagrams with an dryland pollen sum – i.e. effectively excluding types possibly produced by wetland herbs – lead to a different pollen diagram zonation and a different palaeoecological interpretation (cf. De Klerk 2004). In realtiy, the Bølling oscillation of Iversen might be a local phenomenon only without any (over)regional significance, although such a conclusion is not completely evident from the original data. 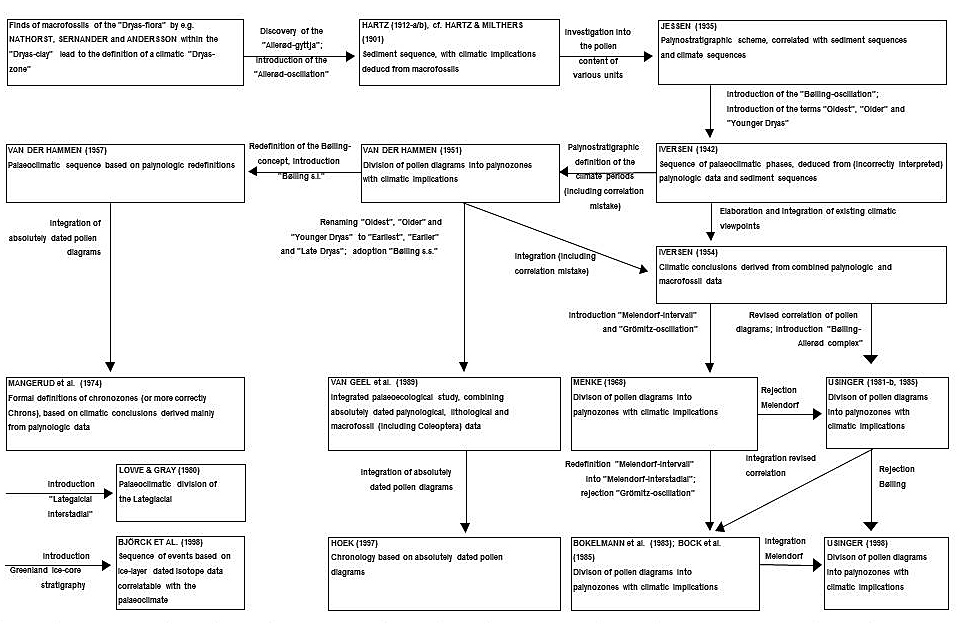 Due to another correlation error between Danish, Dutch and NW German pollen diagrams, Menke (1968) introduced another warm period: the ‘Meiendorf’. Taking into account the correlation mistakes and other misleading errors of Menke, Usinger (1985) proposed to introduce a ‘Bølling-Allerød complex’ and to abolish the term ‘Meiendorf’. Reacting on criticism mainly by Usinger, Menke made some revisions in his palynostratigraphic scheme (cf. Bokelmann et al. 1983; Bock et al. 1985). Slightly modified, the views of Menke were used to propose a new biostratigraphic division for the Eifel region (and far beyond) by Litt & Stebich (1999) and Litt et al. (2001, 2003). In a later study, Usinger (1998) accepted the Meiendorf, but proposed to abolish the term ‘Bølling’.

In the meantime, it had become clear that the palaeoclimate can much more accurately be reconstructed from Coleoptera (Coope 1986) and oxygen isotopes (Siegenthaler & Eicher 1986) than from botanical fossils. Several smaller fluctuations were deduced from oxygen isotopes from Swiss lakes, including the Aegelsee fluctuation, Gerzensee fluctuation and the Preboreal oscillation (Lotter et al. 1992). Björck et al. (1998) proposed to abolish all previously used schemes and to replace them with a scheme based on the oxygen isotope records from Greenland ice cores. Coleoptera from England and The Netherlands indicated that the highest summer temperatures were reached at the beginning of the Weichselian Lateglacial (after 12900 radiocarbon years BP), while pollen simultaneously showed an open dryland vegetation; in other regions, however, a major temperature rise was indicated first after ca. 12450 radiocarbon years BP (cf. De Klerk 2004). In correlating the isotope data from Greenland with the Coleoptera data from England, Björck et al. (1998) probably included a correlation mistake of approximately 500 years between the annually laminated ice-cores and the radiocarbon-dated Coleoptera data (cf. Billwitz et al. 2000; De Klerk 2004). The latter prefers to assume that around 12900 radiocarbon years BP only a minor temperature rise occurred, whereas around 12450 radiocarbon years BP the temperature rose greatly.

The main conclusions are that:

1: the existing terminology is very unfortunate and should be completely abandonned;

2: an international discussion is necessary in order to solve the existing problems, especially with respect to correlation and (independant or integrated) interpretation of the various records and proxies;

3: it is best to develop – for the time being (state 2004) – regionally restricted schemes with an unambiguous terminology independently for various records and proxies and to refrain from still premature overregional correlations.

Addition: The pollen diagram from Hartmut Usinger from Bøllingsø was published by Krüger & Damrath (2020) that indicates that the fluctuation identified by Iversen is indeed identical with the “Bølling” as identified in other regions.

Lowe, J.J. & Gray, J.M. (1980): The stratigraphic subdivision of the Lateglacial of NW Europe: a discussion. In.: Lowe, J.J., Gray, J.M. & Robinson, J.E. (eds.): Studies in the Lateglacial of North-West Europe. Including papers presented at a symposium of the Quaternary Research Association held at University College London, January 1979. Pergamon Press, Oxford: 157-175.

Van Geel, B., Coope, G.R. & Van der Hammen, T. (1989): Palaeoecology and stratigraphy of the Lateglacial type section at Usselo (The Netherlands). Review of Palaeobotany and Palynology 60: 25-129.