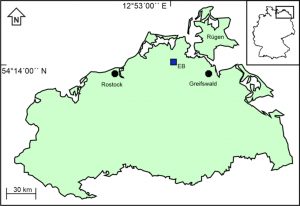 Location of the Endinger Bruch area (EB) in Mecklenburg-Vorpommern

Vegetation history of the Weichselian Lateglacial

Palynological analyses focussed on the identification of vegetation phases of the Weichselian Lateglacial in northern Vorpommern in a spatial context (Kaiser et al. 1999; Billwitz et al. 2000; De Klerk 2002; Terberger et al. 2004). Various “Vegetation phases of Vorpommern” were introduced to avoid a widespread confusion on the stratigraphy and geochronology of the Weichselian Lateglacial based on the pollen diagram of core “Hoher Birkengraben” from the centre of a large former lake basin. During Open vegetation phase I (“Oldest Dryas” or earlier part of the “Meiendorf”), the dry grounds were inhabited mainly by herbs, in which during the Hippophaё phase (“Bølling” or later part of the “Meiendorf”) Hippophaё shrubs expanded. Open vegetation phase II (“Older Dryas”) was mainly dominated by herbs and (dwarf)shrubs. During the Lateglacial Betula/Pinus forest phase (“Allerød”), the dryland vegetation closed. Four different subphases are distinguishable based on fluctuations in the curves of pollen attributable to birch and pine. The vegetation opened-up again in Open vegetation phase III (“Younger Dryas”). A new expansion of forests took place during the Early Holocene Betula/Pinus forest phase (“Preboreal”).

Four further cores at different distances to palaeo-vegetation units were analysed and provide insight in spatial vegetation patterns during the earlier vegetation phases of the Weichselian Lateglacial (De Klerk 2002). 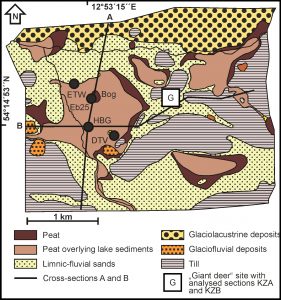 Geomorphological map of the Endinger Bruch area with the analysed sections

The Holocene vegetation history is described by De Klerk (2017a/b). The pollen types attributable to trees and herbs of dry grounds (for convenience also including birch and willow) show the typical palynological sequence of Vorpommern, including a phase with high values of PINUS and BETULA pollen and a pronounced phase with high CORYLUS values coinciding with gradually increasing and eventually stable values of pollen types attributable to Ulmus, Quercus, Tilia and Fraxinus. A conspicuous decline of ULMUS pollen dating to ca. 7550-7300 cal yr BP does not represent the ‘classical’ elm decline. The dates and the trends of TILIA, FAGUS and PLANTAGO LANCEOLATA type pollen indicate that the classical decline is likely registered by a small decrease higher-up. The top of the section dates around 4000 cal yr BP: later peat layers have been destroyed after water level lowering during (sub)recent times.

The upper part of pollen diagram HBG shows peaks of ALNUS values alternating with abundance of pollen/spores produced by open mire taxa, especially ferns and Cyperaceae. This pollen sequence is interpreted as a cycle of interchanging alder forests and open mires under influence of natural carr hydrology. A pollen diagram from a nearby bog within the alder carr (EB25) does not show similar fluctuations of ALNUS pollen, indicating that the closed/open phases are not regional within the complete carr, but (extra)local around the HBG spot only. Similar open and closed phases may have occurred at other locations in the carr as well, but in that case not simultaneously. This implies that a mosaic may have existed of closed forests and open mire patches next to each other shifting across the carr in time and space. 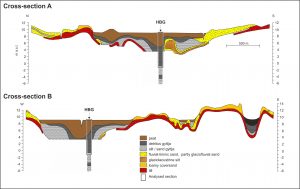 Lithological cross-sections A and B through the Endinger Bruch area and location of the analysed section Hoher Birkengraben (HBG), after De Klerk (2002) and Kaiser (2001)

The EB25-bog-section covers Cyperaceae/brown moss peat that was formed in a fen, i.e. a terrestrialisation vegetation was expanding from the lake shores towards the centre. Ombrotrophic conditions, indicated by the formation of Sphagnum peat, started around 7000 cal yr BP. This means that the Endinger Bruch bog, although not the oldest, is one of the older ombrotrophic mires in NE Germany. High and more or less ever increasing values of CALLUNA VULGARIS towards the top of the diagram point to continuous presence of common heather. Although Sphagnum was the main peatforming plant taxon, values of SPHAGNUM spores are extremely low. Only in the top zone EB25-G values increase to ca. 10%, but this is still extremely low in comparison with Sphagnum values in other peat moss peats. Sporulation of Sphagnum is mainly during stress situations and the low values of the spores point thus to an ecologically extremely stable mire.

In the Endinger Bruch area numerous important archaeological objects were found, of which an antler of giant deer (Megaloceros giganteus) and a rib of horse – both showing traces of anthropogenical use – belong to the oldest absolutely dated archaeological finds within a stratigraphic context in Mecklenburg-Vorpommern (Terberger 1996). The items date at 11500 and 11800 radiocarbon years BP, respectively, and thus originate from the earlier part of the Lateglacial Betula/Pinus forest phase (“Allerød”). A special study dealt with the reconstruction of the landscape scenery immediately around this so-called “giant deer find spot” (Kaiser et al. 1999): a pollen diagram from a small basin close to the find spot shows prominent presence of Hippophaё shrubs during the Hippophaё phase, expansion of (dwarf)shrubs of Juniperus and Betula nana during Open vegetation phase II, and during the Lateglacial Betula/Pinus forest phase (to which the finds belong), of Salix, whereas birches played clearly a less dominant role immediately around the find spot. The local vegetation within the small basin included alternating phases with Comarum and sedges. 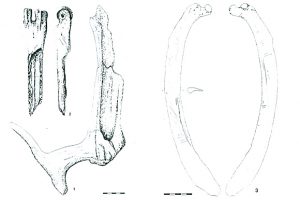 Archaeological finds in the Endinger Bruch area: 1: Antler of Giant deer with traces of groove and splinter technique; 2: elk-bone with blow-marks and cut-marks; 3: sharpened horse-ribs; from Kaiser et al. (1999)

Although the radiocarbon method did not provide useable results for the Lateglacial and Early Holocene part of the HBG-core, an independent chronology has been provided by microtephra research by Christine Lane and Victory Cullen within the Reset project. The results revealed six tephra layers (Lane et al. 2012). Four of these layers have been correlated to previously described tephra layers found in sites across Europe. The Laacher See Tephra (Eifel Volcanic Field; 12880 cal yr BP) is present in very high concentrations within sediments of the Lateglacial Betula (/Pinus) forest phase (~Allerød). The Vedde Ash (Iceland; 12121 +/- 114 ca yr BP) lies midway through Open vegetation phase III (~Younger Dryas). The Hässeldalen (11380 +/- 216 cal yr BP) and the Askja tephras (Iceland; 10810 +/- 240 cal yr BP) are positioned in the core section corresponding to the Early Holocene Betula/Pinus forest phase (~Preboreal). Furthermore, the layers facilitate direct correlation of the regional vegetation record to other palaeoenvironmental archives, which contain one or more of the same tephra layers, from Greenland to Southern Europe. In doing this, localised variations are confirmed in some aspects of the pollen stratigraphy; however transitions between the main vegetation phases appear to occur synchronously (within centennial errors) with the equivalent environmental transitions observed in sites across the European continent.

This research was carried out in close cooperation with Alexandra Barthelmes, Knut Kaiser,  Christine Lane and Thomas Terberger.

Publications including palynological data from the Endinger Bruch: