A new interpretation of a pollen diagram from the area of Hennigsdorf (C Brandenburg, NE Germany) from the legacy of Klaus Kloss

In search for pollen diagrams from NE Germany for the study of patterns in vegetation and sedimentation during the Weichselian Lateglacial it was discovered that many unpublished palynological data from the period of the German Democratic Republic are preserved in archives of research institutions. In order to save these data from sinking into oblivion and to make them available to the scientific audience, part of this material was digitalised and published (see revision of old palynological data from E Germany).

One of the sites investigated by Klaus Kloss of which pollen counts were digitalised is “Schönwalde P Schö 2” near Hennigsdorf. The pollen diagram of this core had already been published by Kloss & Wechler (1987). They did, however, not display all pollen types, and provided – compared to the present-day knowledge on the vegetation history of the Weichselian Lateglacial and Early Holocene in NE Germany – a somewhat erroneous interpretation of the pollen diagram.

Location of Hennigsdorf to the northwest of Berlin

The site is positioned between Schönwalde and Hennigsdorf in the vicinity of the forestry house Blockbrück. The palynological study was triggered by the discovery of Palaeolithic artefacts on the northwestern slope of a dune along the terrestrialised valley of the Muhrgraben brook.  Surveying corings revealed the presence of a ca. 50 m wide and 5 m deep kettle-hole at the foot of the dune that was selected for palynological research. The studied sequence consists of aquatic sediments. The Laacher See tephra (LST) was found between 381 and 384 cm depth.

The basal pollen zone of the Schönwalde diagram (SPZ SHW-A) is correlated with the Lateglacial Betula/Pinus forest phase (Allerød). The beginning of this vegetation phase is characterised in the regions of southern Mecklenburg-Vorpommern, northern/central Brandenburg and Berlin by a peak of BETULA pollen followed by prolonged high values of PINUS pollen. Since this peak of BETULA pollen does not occur in the Schönwalde diagram, it can be concluded that the early part of the Lateglacial Betula/Pinus forest phase is not recorded in the Schönwalde core. Based on fluctuations in the curves of PINUS, BETULA, and SALIX pollen, two subzones can be distinguished. Pollen types produced by local wetland plants indicate that the open water in the kettle-hole was inhabited by Myriophyllum spicatum and Nuphar, whereas the wetland vegetation along the basin margins probably consisted of Equisetum, sedges, grasses, and possibly also Typha latifolia, Typha angustifolia and/or Sparganium, and Menyanthes. 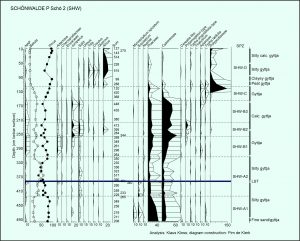 Zone SHW-B, including three subzones, is correlated with Open vegetation phase III (Younger Dryas or Late Dryas). Subzone SHW-B2 is distinguished from both adjacent subzones by higher values of JUNIPERUS and SALIX pollen, and lower values of ARTEMISIA. A peak of JUNIPERUS pollen in the middle part of Open vegetation phase III is often found in pollen diagrams of central Brandenburg and Berlin, but its significance is at present still unclear (De Klerk 2008). A sedge vegetation probably grew along the basin margins that possibly also included Typha and Sparganium. Presence of Typha is remarkable for the cold phases of the Lateglacial since it needs relatively high temperatures (Kolstrup 1979), but the study by Isarin & Bohncke (1999) show that the study area is positioned around the northern boundary of the required temperature regimes. Open water was probably inhabited by Potamogeton, Myriophyllum verticillatum and Nuphar.

Pollen zone SHW-C represents the early Holocene when forests of birch and pine dominated the dry grounds. The pollen types excluded from the sum reflect an open water vegetation of Nymphaea and a marginal vegetation of Typha latifolia with later expansion of ferns (possibly Thelypteris palustris).

The upper pollen zone SHW-D is difficult to interpret. The sudden increase in values of ULMUS, TILIA, CORYLUS, QUERCUS and ALNUS pollen at the base of this zone indicates a hiatus between zones SHW-C and SHW-D. The pollen curves do not show enough typical palynostratigraphic trends to allow a linkage to the general vegetation history of central Brandenburg and Berlin. The absence of pollen types typical for the late Holocene (e.g FAGUS, CARPINUS, CEREALIA, PLANTAGO LANCEOLATA) shows that the later phases of the Holocene are not recorded in the investigated basin. The types excluded from the sum do not provide any information on a local wetland vegetation within the basin, with the exception that the relatively high but decreasing values of Polypodiaceae spores indicate an (extra)local presence of ferns.

De Klerk, P.: Patterns in vegetation and sedimentation during the Weichselian Late-glacial in north-eastern Germany. Journal of Biogeography 35: 1308-1322.

Kolstrup, E. (1979): Herbs as July temperature indicators for parts of the pleniglacial and late-glacial in the Netherlands. Geologie en Mijnbouw 58: 377-380.