Palynological studies in the Dutch fluvial area near Leerdam

Palynological research in the Dutch fluvial area provides insights in vegetation patterns and dynamics prior to large-scale human impact on the landscape. In order to trace these, time-synchronous cores have to be studied. Since pollen deposition values depend on the distance to the pollen sources (i.e. vegetation units), the cores must be located at different distances to various  landscape elements (containing different vegetation units). In the surroundings of Leerdam (C Netherlands) two cores, located in the residual channel and in the flood basin of the Schaik channel belt (a former Rhine distributary), have been studied palynologically. Calibrated radiocarbon dates demonstrate that the time period studied is between ca. 3500 and 2000 calendar years BP. The cores cover partly the same time period. 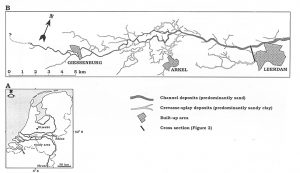 During river activity, the vegetation in the flood basin contained reeds with Phragmites and Thelypteris. An alder/willow carr developed after river activity had ended. No clear succession is visible in the pollen diagrams, suggesting continuous paludification due to rising groundwater levels. Grazing of wetland mammals in the flood basin is indicated by a sample probably representing an excrement. 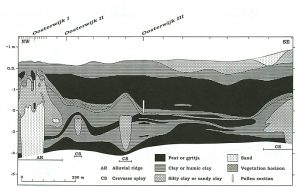 Cross-section over the Schaik alluvial ridge and the adjacent southeastern flood basin. Indicated are the palynologically analysed sections of cores Oosterwijk I and Oosterwijk III

During (minor) river activity, local vegetation succession in the residual channel started with reed marshes along the channel margins, with Typha angustifolia and occassional Sparganium in the deeper parts. After river activity ceased a Bidentetea-vegetation developed on clay on the lower parts of the natural levees, later succeeded by expanding reedlands. Vegetation succession ended with an alder/willow carr. There are indications of the occurrence of a fire in the surroundings of the channel, temporarily disturbing the vegetation.

Levee vegetation consisted of a deciduous forest,  including  Corylus, Fagus, Acer, Tilia, Betula, Carpinus, and Fraxinus. Pinus was probably present as well. Other tree species might also have inhabited the natural levees, but this is not clearly inferrable from the pollen diagrams.

This research was carried out in close cooperation with Roel Janssen, Hans Joosten and Torbjörn Törnqvist.

De Klerk, P. (1992): Reconstruction of the natural vegetation at the Schaik alluvial ridge near Leerdam (Central Netherlands) and in the flood basin south of the alluvial ridge – Preliminary results. Stuifmail 10: 6-13.