In search for pollen diagrams from NE Germany for the study of patterns in vegetation and sedimentation during the Weichselian Lateglacial it was discovered that many unpublished palynological data from the period of the German Democratic Republic (DDR) are preserved in archives of research institutes. In order to save these data from oblivion and to make them available to the scientific audience, part of this material was digitalised and published (see revision of archive palynological data from the time of the German Democratic Republic). Four of these diagrams are from the legacy of Franz Fukarek and originate from cores in the area of the Friedländer Große Wiese and the Galenbecker See. Whereas the first publication of this material presents pollen values based on a measurement and recalculation of hand-drawn pollen diagrams by Fukarek (De Klerk 2004), later the original counting lists were found which allowed a publication of one of the diagrams based on raw counts (Van Asch et al. 2012). 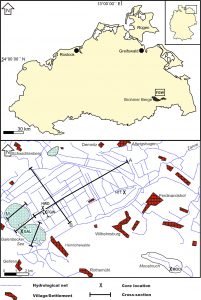 The Ueckermünder Heide consists of deposits of a large former proglacial lake known as the “Haffstausee”. In its southwestern part, the Friedländer Große Wiese peatland fills an approximately 8×12 km long depression in a former glacial valley. The Rosenthalian terminal moraines are positioned immediately south of the peatland and mark a regionally restricted glacial advance after the melting of the Pomeranian inland ice. The basal till in the glacial valley is covered with 6-11 m thick sand layers. Two large basins – separated by a low sand ridge – occur in the area around the Galenbecker See and ca. 1 km further to the northeast. These, and numerous smaller basins, are primarily filled with lake marl and calcareous gyttja. After the onset of peat formation, a large percolation mire developed under influence of a continuous flow of seepage water from the Rosenthalian terminal moraines. Located between the Friedländer Große Wiese and the Rosenthalian terminal moraines are a series of coastal terraces from the former proglacial lake, which includes many peat-filled basins of which the Moosbruch is the most prominent: it is surrounded by dunes that partly stretch-out into the basin, organic sediments reach over 6 m thickness and peat thickness seldom exceeds 2 m.

Cross-sections A and B through the Friedländer Große Wiese, modified after Bramer (1979; cf. Bramer 1964).  Due to peat oxidation after the 1960s, the indicated height asl. probably does not correspond to the present-day elevation

Although the Fukarek-diagrams contain only a limited number of pollen types, they show (in combination with each other) an almost complete pollen sequence of the Weichselian Lateglacial and the Holocene with a relative high sample resolution.

A core located near site HWD, presented by Van Asch et al. (2012), was analysed for pollen, chironomids, and oxygen and carbon isotopes in order to reconstruct summer temperature changes associated with changes in vegetation development during the Weichselian Lateglacial.  Chironomid-inferred mean July air temperatures (C-IT) for the Allerød range between ca. 14.0 and 14.8°C. A temporary decrease in C-IT of around 1°C, a negative shift in the isotope records, and a minor decline of pollen attributable to birch may correspond to Greenland Interstadial 1b. Even though the transition to the Younger Dryas appears to be affected by reworking and redeposition processes, a drop in C-IT to around 11.1°C is reconstructed for the later part of the Younger Dryas. At the transition to the Holocene, C-IT increased to ca. 15.7°C, while birch and pine forests re-expanded. 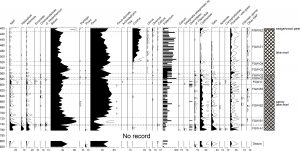 A rise of CORYLUS pollen in zones HWD-E and MOO-C marks the invasion of hazel, which greatly expanded and became an important vegetation element. Gradual increases of ULMUS, QUERCUS, TILIA, and ALNUS pollen  indicate that the associated taxa gradually expanded in the Friedländer Große Wiese region. Finally they became the dominant forest elements and formed stable populations for several thousands of years, as can be concluded from the hardly fluctuating pollen curves in the Moosbruch diagram. The basis of the peat in core HWD is positioned below the decrease in pollen attributable to Corylus and the increase in pollen ascribable to elm, oak, and alder, i.e. at a substantially lower palynostratigraphic level than at the HTT-site. The peat at the HWD-site might originate from organic material penetrating from a higher level (e.g. roots), but it is also possible that terrestrialisation at the HWD-site started considerably earlier than at the HTT-site.

After the mid-Holocene elm decline, which defines the boundary between zones MOO-D3 and MOO-E, Fagus and Carpinus gradually expanded on the dry grounds. Peat formation in the Moosbruch at the cored location started clearly after the rise in pollen attributable to beech. High values of CYPERACEAE, PERISPORELOSE FILICES, and SPHAGNUM pollen and spores indicate a local peatforming vegetation of sedges, ferns, and mosses.

Above the decrease of FAGUS pollen in the GAL-diagram, high values of pollen attributable to cultivated plants and agricultural weeds  show a prominent deforestation of the landscape and the subsequent enlargement of agricultural areal since the late Medieval.

Development of the Galenbecker See

The Galenbecker See is a large, shallow lake. The sandy subsoil in the eastern part of the basin is rather flat, whereas in the western part a deep channel-like basin exists. The basal lake sediments consist of lake marl, the top lake sediments are calcareous gyttja. One ‘deep geological core’ in cross-section K around 1250 m shows that below the ‘basal’ sand other limnic sediments occur.

Thick peat layers occur along the lake shores embedded between lake sediments. This shows that in former times with lower water levels large parts of the original lake had been terrestrialised and that only a small lake, confined to the area of the deep channel, grew in height concomitant to the peat of the adjacent mire. After a rise in water level which was too rapid to be balanced by peat growth, the mire drowned and the lake enlarged its size. A comparison of the original basin shape with the present position of the lake shows that the it moved in northeastern direction. 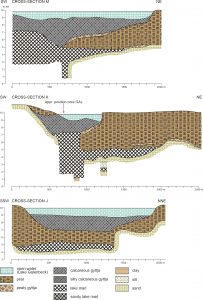 Cross-sections through the Galenbecker See, drawn after original core descriptions and sediment columns of Bramer (1964). Due to peat oxidation after the 1960-ies, the indicated height asl. probably does not correspond to the present-day elevation

The sediments in the deep channel from which core GAL was derived are relatively young: even a single sample at 900 cm depth seems to date from after the elm decline. The zone boundary GAL-C/GAL-D displays a decrease in FAGUS pollen values  and corresponds with the transition from lake marl to calcareous gyttja. Since lake marl outside the channel-like depression in the Galenbecker See occurs only below the thick peat layers, and calcareous gyttja only above, this transition probably marks the start of the expansion of the lake. This shows that in the late Medieval the small lake, which was until then constricted to the deep channel, started to expand at the expense of the surrounding mire. Water level rises during the late Medieval, possibly due to anthropogenic activities (e.g. forest clearances and stowage for water mills), but possibly also related to climatic changes, have regularly been reported for NE Germany. Stowage for mills occurred downstream in the Zarow river that drains the Friedländer Große Wiese.

The rises of CYPERACEAE pollen and PERISPORLOSE FILICES in zone GAL-D might indicate an increase of sedges and Thelypteris in the mire adjacent to the Galenbecker See. An increase of CYPERACEAE pollen is possibly related to hay-making on the mires. GRAMINEAE and RUMEX pollen values may indicate that also Phragmites and wetland Rumex taxa expanded, although this pollen might also stem from dryland plants in the open cultural landscape. 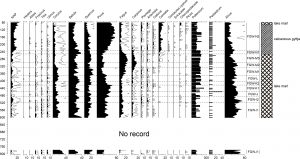 The Friedländer Große Wiese around 1700 CE

An important historical document for Vorpommern is the Swedish Register Map (Schwedische Matrikelkarte; preserved in the Vorpommersche Landesarchiv Greifswald), which was prepared around 1700 CE for taxing purposes. The work is unfortunately not completely reliable in displaying areas that were of less importance for tax-levy, which might explain the incorrect position of the Moosbruch and the gap between the maps south of the river Zarow (department Torgelow) and those north of the river Zarow (district Anklam). The area was sparsely populated: the many small villages that currently exist must have been erected after 1700 CE.

The register map covers only the northern fringe of the Friedländer Große Wiese and displays it as an open mire. The descriptive text mentions it as a marshy meadow of sedges with large areas of reed. Since a ditch crosses the area, and since it is mentioned in the descriptive volumes that due to the holding-back of water mowing is partly possible in dry years, reclamation of the Friedländer Große Wiese can be inferred to have started prior to the 18th Century. Some small meadows were present along its northern shore around 1700 CE.

In the northeast, the open mire of the Friedländer Große Wiese grades into a large carr, surrounded by dryland deciduous and coniferous forests. Adjacent to this forest fringe was a heathland that partly consisted of deserted agricultural fields. The deciduous forest south of the Friedländer Große Wiese is mentioned to have consisted of oak, beech, hazel, and alder. The presence of alder indicates that some moist areas were present within the area. An additional remark was made that the area was relatively flat and suitable for forest clearance to create space for meadows. The meadows were noted to have had a marshy soil and to have been partly grown with bushes. 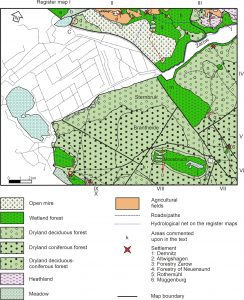 The landscape surrounding the “Friedländer Große Wiese” around 1700 C.E., based on several Swedish register maps

The Moosbruch is described as grown with (unspecified) bushes and scrubs, whereas it was surrounded by a fringe of oaks.  Within the peatland an isle containing a pine forest was present. The meadows within the Moosbruch are mentioned to have had a marshy soil. Prominent is the ditch that crosses the Moosbruch, indicating that artificial drainage of this peatland already occurred around 1700 CE. Terrestrialisation of the Moosbruch, therefore, had proceeded to such level that the area was easily accessible.

This forested landscape-scenery is in sharp contrasts with the high amounts of pollen attributable to cultivated plants and agricultural weeds in the pollen diagram from the Galenbecker See. The register maps show only small agricultural fields. The agricultural fields inferred from the pollen diagram, therefore, must have been located predominantly on the northwestern, western and southwestern sides of the Galenbecker See that were not mapped by the Swedish cartographers.

De Klerk, P. (2008): Patterns in vegetation and sedimentation during the Weichselian Late-glacial in north-eastern Germany. Journal of Biogeography 35: 1308-1322.