Development of the percolation bog “Ispani 2” in Western Georgia

Percolation mires occur in landscapes with a large water supply very evenly distributed in time, and with water losses by evapotranspiration and run-off not – not even periodically – exceeding supply: the water level does not drop and the peat remains weakly decomposed, with large pores, and elastic.

Previously, these conditions have been thought to be restricted to groundwater fed systems. Theoretical considerations, however, indicated that percolation mires could exist which are only fed by rainwater (Couwenberg & Joosten 1999). The following characteristics were predicted for such “percolation bogs” (cf. Kaffke et al. 2000; Haberl et al. 2006): the precipitation surplus is large and evenly distributed over the year; the mire has a convex shape (indicating ombrogenity); the bog lacks clear patterning because the development of hummocks and hollows depends on lateral water flow (cf. Couwenberg & Joosten 1999, 2005); the vegetation is acid, possibly more nutrient rich than ‘normal’ bogs because of rheothrophy effects; the peat is hardly decomposed over a large depth. 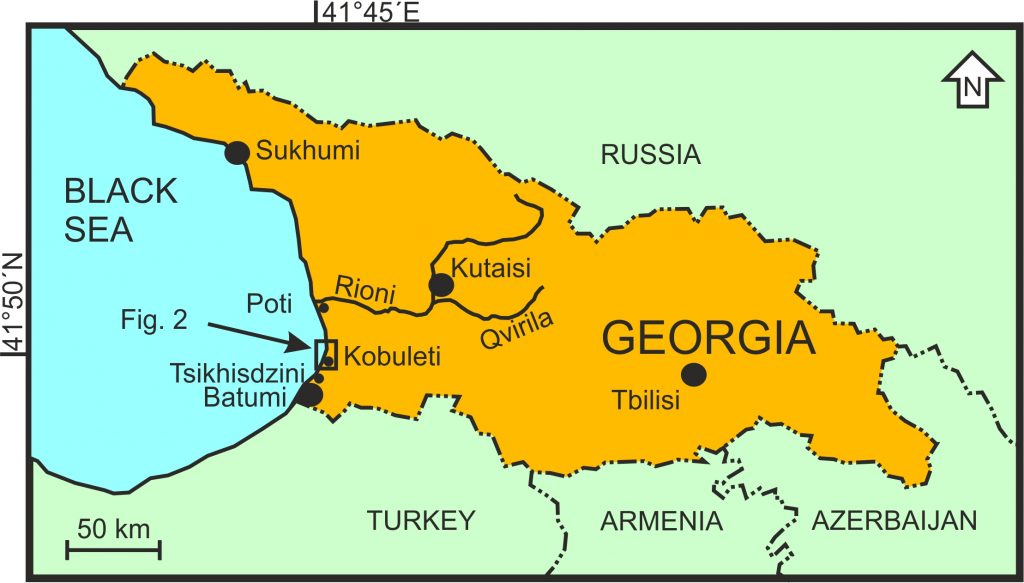 Location of the study area near Kobuleti in western Georgia

The Kolkheti wetlands of western Georgia (“Colchis”) with their subtropical climate seemed ideal for the formation of percolation bogs and were, therefore, searched for this mire type. It was discovered that the peatland Ispani 2 near Kobuleti answers to many of the predicted criteria and was therefore declared to be the first discovered percolation bog worldwide (Kaffke et al. 2000; Matchutadze & Joosten 2003; Matchutadze & Krebs 2003; Haberl et al. 2006). A second percolation bog is the Imnati peatland near Poti, to the north of Ispani 2 (Haberl et al. 2006). 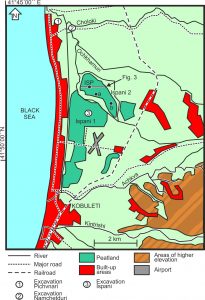 Location of the Ispani 2 peatland near Kobuleti

The Kobuleti area includes both mires “Ispani 2” and the greatly degraded “Ispani 1”, for which it is suspected that it also used to be a percolation bog before degradation. Furthermore, the region is well-known for its important archaeological excavations of Pichvnari and Namchetduri, as well as a settlement buried below the peats of Ispani 1. This setting provided a unique opportunity for investigation of wetland development within the context of dryland vegetation history influenced by human culture. 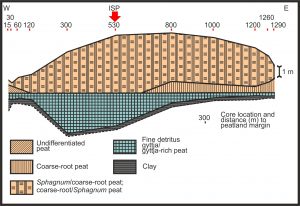 Cross-section through the Ispani 2 peatland, including the location of the palaeoecologically analysed core ISP

Prior to 5400 cal yr BP, the Ispani basin was a floodplain of an active river system where overbank deposits with fluvially transported pollen attributable to Castanea  were deposited. Subsequently, a lake or lagoon developed in which reeds expanded. These were succeeded by herb-rich open alder carrs. After 1900 cal yr BP, Carpinus and Fagus expanded on the dry grounds, where formerly Quercus was more abundant. Also Castanea declined. Local reedbeds, that burned regularly, succeeded the alder carr. After 1000 cal yr BP, a percolation bog developed resulting in the formation of 4 m of loose, porous, and largely undecomposed Sphagnum imbricatum peat with Molinia roots, with an extreme high peat accumulation rate of 4 mm/year. 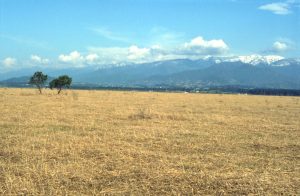 The Ispani 2 peatland; the analysed core ISP was retrieved near both trees in the left part of the picture (photo: Hans Joosten)

The pollen and macrofossil record indicate that during the last ca. 1000 years – the phase of the percolation bog – the vegetation remained very stable. Only during the last century prominent changes occurred due to large-scale human impact on the landscape (cf. Joosten et al. 2003). A peculiar vegetation element in the southern part of Ispani 2 is the occurrence of a population of Calluna vulgaris wide outside the general distribution area of this species, and the only known occurrence in Georgia (Kaffke et al. 2002).

Kaffke, A. (2008): Vegetation and site conditions of a Sphagnum percolation bog in the Kolkheti Lowlands (Georgia, Transcaucasia). Phytocoenologia 38: 161-176.

This is very interesting research!