A pollen diagram from a terrestrialised bay of the Blankensee (C Brandenburg, NE Germany) from the legacy of Klaus Kloss

In the search for pollen diagrams from NE Germany for the study of patterns in vegetation and sedimentation during the Weichselian Lateglacial it was  discovered that many unpublished palynological data from the period of the German Democratic Republic are preserved in archives of research institutes. In order to save these data from oblivion and to make them available to the scientific audience, part of this material was digitalised and published (see revision of old palynological data from E Germany). One of the digitalised pollen diagrams by Klaus Kloss is from a core from a terrestrialised bay of the Blankensee in central Brandenburg.

The Blankensee is a lake with a diameter of several kilometres between the villages Blankensee, Stangenhagen and Schönhagen within a vast complex of Urstromtäler. A peatland girdle surrounds the lake and indicates that in former times – prior to terrestrialisation along the margins – it was considerably larger. The central part of the lake has a depth of up to 15 m and a basin fill of predominantly lake marl. 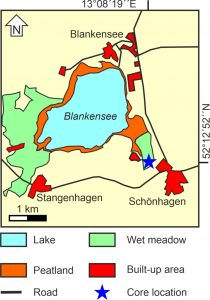 Map of the Blankesee and its surroundings, and the location of core “Schönhagen 96/1” 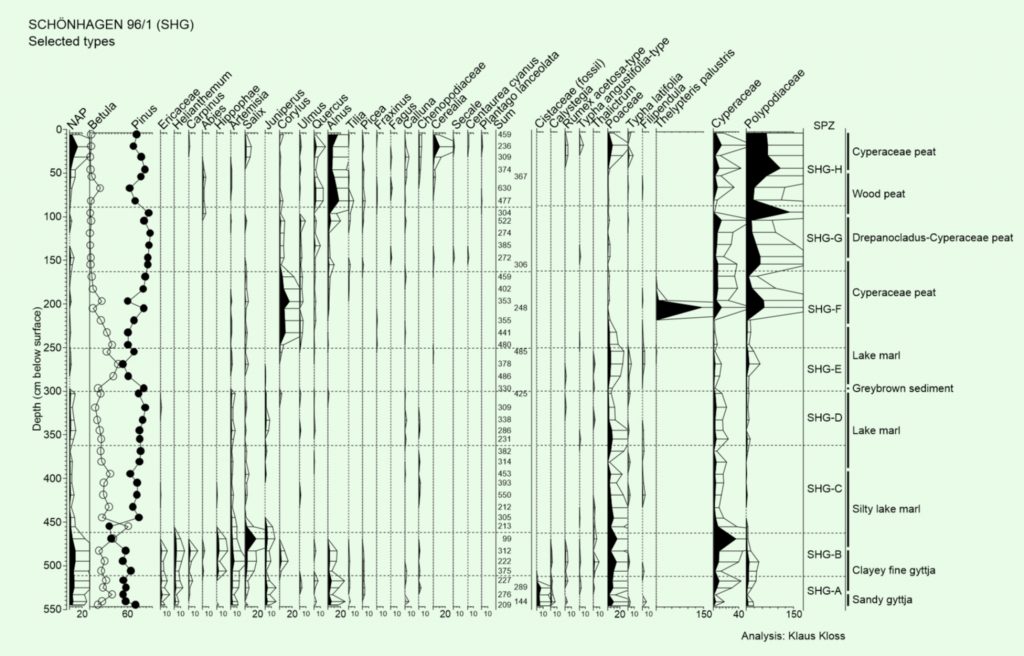 The pollen diagram covers the complete Weichselian Lateglacial and Holocene, including the first vegetation phase of the Lateglacial that hardly occurs in pollen diagrams from NE Germany (Zone SHG-A). The pollen diagram shows the typical pollen sequence of central Brandenburg and the Berlin area for the Lateglacial and Early Holocene; the middle and late Holocene are not clearly registered. The sediment sequence contains a lake marl with a clastic component corresponding to the Early Lateglacial up to the late Lateglacial Betula/Pinus forest phase (“Allerød”; Zone SHG-C) that is covered with pure lake marl. A dark-coloured sediment originates from the beginning of the Holocene (transition zones SHG-D and -E). Peat formation at the coring location started during the Early Holocene Corylus phase (“Boreal”; zone SHG-F), indicating the start of terrestrialisation at the southeastern lake-bay.