A pollen diagram from a kettle-hole mire near the Kalksee (N Brandenburg, NE Germany) from the legacy of Klaus Kloss

In the search for pollen diagrams from NE Germany for the study of patterns in vegetation and sedimentation during the Weichselian Lateglacial it was discovered that many unpublished palynological data from the period of the German Democratic Republic are preserved in archives of research institutes. In order to save these data from oblivion and to make them available to the scientific audience, part of this material was digitalised and published (see revision of old palynological data from E Germany). One of the cores palynologically analysed by Klaus Kloss is the core “Binenwalde 97/2” from a kettle-hole mire near the Kalksee (N Brandenburg, NE Germany).

The investigated kettle-hole mire (53°02´N, 12°49´E) is located in the nature conservation area “Ruppiner Schweiz”. A few hundreds of metres to its northeast lies the Kalksee, which is positioned in a meltwater valley or subglacial valley that lies immediately in front of the Frankfurtian terminal moraines; this valley is bordered by outwash plains of the Frankfurtian glacial advance.

Location of the study area (BWL) in northern Brandenburg

Unfortunately, hardly any notes by Klaus Kloss have been preserved that give a detailed characterisation of the locality. As kettle-holes in general are rather small, it can be expected that the investigated locality is also of restricted extent. This is supported by the fact that the basin is not indicated in the German topographical map 1:25000 of the area on which the location was marked by K. Kloss.

The length of the analysed section is 340 cm, but it is unknown whether this represents the total depth of the basin. Few remarks in the field notes mention that during coring in 1997 the kettle-hole mire was an eutrophic forest covered with a vegetation of Polygonum hydropiper, P. mite and/or P. minus. The same notes describe the upper 15 cm of the cored section as fine detritus gyttja, with between 15 and 25 cm a transition via coarse detritus gyttja to “fine peat”. It is furthermore mentioned that “at some depth” remains were found that resemble Eriophorum vaginatum, together with mosses. Further lithological descriptions have not been preserved. 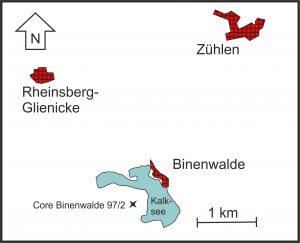 Location of the analysed section southwest of the Kalksee

The bottom zone of the Binenwalde pollen diagram correlates with Open vegetation phase III (Late Dryas). The pollen sequence indicates a predominant open dryland vegetation of Helianthemum, Chenopodiaceae, Ericaceae, and Artemisia that also included juniper. In general, NAP-types in pollen diagrams from southern Mecklenburg and northern Brandenburg show predominantly lower values than the Binenwalde diagram, whereas normally PINUS pollen shows higher values than BETULA pollen. The differences in the Binenwalde diagram are probably due to the small size of the basin leading to extralocal effects of the vegetation immediately around the kettle-hole.

The pollen diagram will be added soon

Zone BWL-B is distinguished by prominently lower NAP values than the preceding zone and by high values of BETULA and PINUS pollen, and corresponds to the Early Holocene Betula/Pinus forest phase (“Preboreal”). Based on several minor fluctuations, three subzones are distinguished, of which subzone BWL-B2 is characterised by decreased values of PINUS pollen and increased values of BETULA pollen and of NAP-types (mainly ARTEMISIA and to a smaller extent ERICACEAE). This shows that the dryland vegetation had slightly opened-up. Similar openings of the upland are regularly observed in European pollen diagrams and referred to as Piottino, Rammelbeek, or Preboreal oscillation. In pollen diagrams from NE Germany, however, this fluctuation generally is not registered. The fact that it is displayed in the Binenwalde diagram is probably due to the high temporal resolution for the Preboreal of this site and to extralocal effects of the expanded open vegetation types in the immediate surroundings of the small basin.

Zone BWL-C represents the middle part of the Holocene. Three subzones are based on minor fluctuations in the pollen curves, of which subzone BWL-C1 is correlated with the Early Holocene Corylus phase with extensive hazel stands. Elm and oak gradually expanded. The beginning of subzone BWL-C2 is defined on rises in the curves of ALNUS and TILIA pollen that show that alder and lime expanded. High values of PINUS pollen show that pine remained an important tree taxon around the study area. It probably flourished abundantly on the nearby sandy outwash plains. The boundary between subzones BWL-C2 and BWL-C3 is characterised by a decrease in ULMUS pollen that represents the mid-Holocene elm decline around 5800 cal yr BP.

At the lower boundary of the upper zone BWL-D (Late Holocene) values of some pollen types rise abruptly, whereas other pollen types decrease conspicuously: a hiatus probably separates this zone from the preceding zone. BWL-D corresponds with the transition from “fine peat” to “detritus gyttja” mentioned above. Very likely peat formation had stopped or diminished greatly, thus prohibiting the record of a pollen signal. First after water levels rose and gyttja was deposited, a new pollen record could be preserved.