The genus Camptotheca is of great medicinal importance because it contains substances that are effective against various forms of cancer and HIV (Li & Adair 1994; Lorence & Nessler 2004). Currently, Camptotheca is endemic only in central and southern China, and in Tibet. Although its presence in Vietnam has been suspected, botanists have not (yet) found actual specimens in this area (Nguyen Tien Ban 2003).

Camptotheca grows frequently in thickets and may reach heights between 20-30 m. It occurs predominantly along forest margins and streams, and on slopes, normally below 1000-1500 m asl., although it occasionally occurs up to 2400 m asl. The genus occurs in regions with high temperatures, high precipitation and high relative humidity and prefers moist and fertile sites on deep, well-drained, friable clay soils (e.g. Li & Adair 1994).

At present, little is known about the Holocene history of the genus. Knowledge on its occurrence and behaviour under natural conditions could provide important information for effective ecological management and, thus, for the most effective plantation for medicinal purposes. 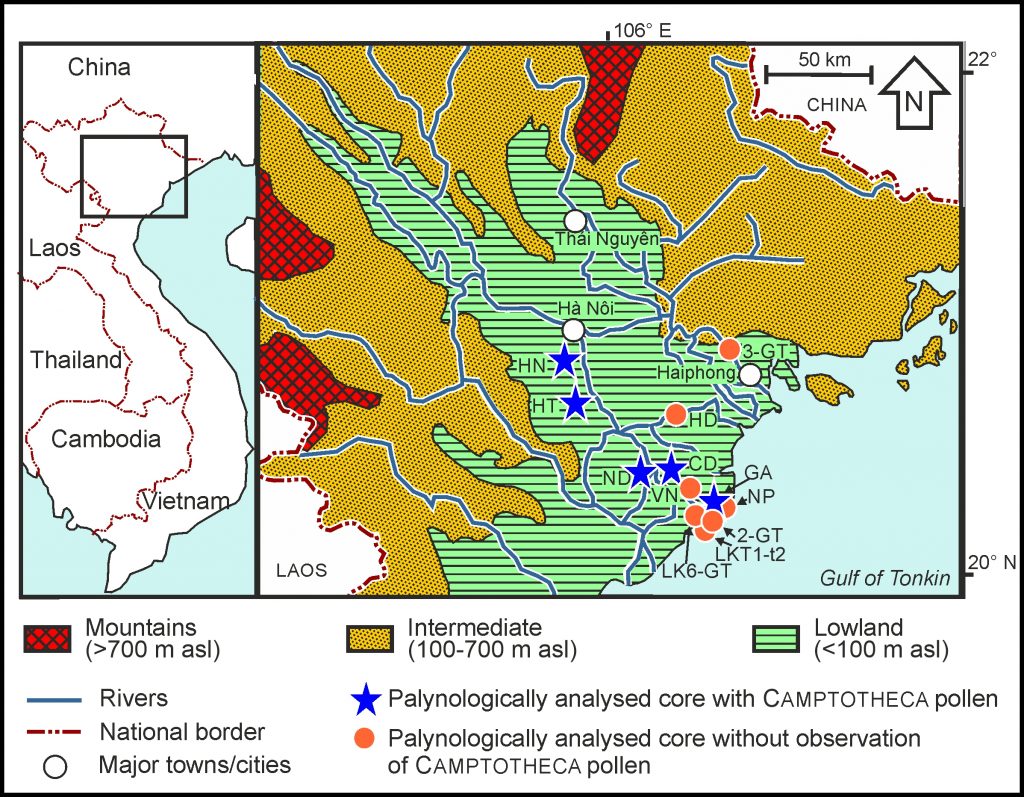 Palynological analyses in the north-Vietnamese Red River Delta revealed that Camptotheca was present in this area – i.e. outside the range of its current natural distribution – between 6500 and 5300 cal yr BP, and probably also between 7400-6500 and 1400-250 cal yr BP. It possibly occurred during other time-slices as well, but the current data does not yet confirm this. Camptotheca probably followed on Carya, Pterocarya and Salix in a specific stage of riparian tree vegetation development. As the genus is sensitive to shade, wetland forests must have been relatively open, and the development of denser forest during later stages may have surpressed Camptotheca again.

This research is carried out in close cooperation with Nguyen Thuy Duong and Hans Joosten.